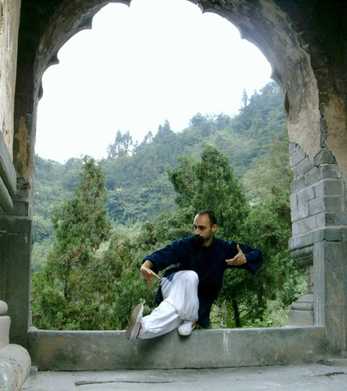 Ismet is a highly skilled and talented teacher of the internal arts of Wudang with more than 30 years of martial arts experience and 16 years of teaching experience. He devoted the last 17 years purely to the internal styles of Wudang and achieved high levels in these traditional Daoist arts in great depth, including Wudang Quan, Liang Yi Quan, Xiang Long Shi Ba Zhuang, Xingyi, Bagua Zhang, Taiji Quan (Tai Chi Chuan) and Neigong (Qigong).

Ismet has been a serious martial arts practitioner since 1985. After being trained as a Kungfu instructor, he travelled in 2000 to China for an intensive longterm internal martial arts training. For many years, he lived in monasteries and academies at several places like Yie He Castle, Ying Shan (Nan Wudang) and Wudang Shan to learn from great Daoist masters. He was very fortunate to become accepted as a disciple of the well-known Daoist grandmaster You Xuan De (the head of the Xuan Wu Pai Lineage from whom he received his Daoist name You Li Han).

Through an intensive, hard training under the supervision and guidance of grandmaster You Xuan De and master master Tang Li Long, he was one of the few westerners that has been exposed to the ‘inner circle teachings’, the essence of the ancient Daoist treasures of mount Wudang.

In 2006 he opened the first Wudang school in Berlin (Germany) and became  the first European that brought the Wudang styles to Germany. Within a short time he attracted students from all over the world with his Wudang Principles concept (WDP), wich stands for a systematic, profound and high quality teaching and training system. In 2011 he became the first westerner opening an internal martial arts school in Wudang Shan (China), wich moved in 2014 to Hainan island in China (WDP Headquarter), where Ismet daily coaches longterm students, who are willing to go through a systematic education program to become WDP Instructors in their own countries.

Being a passionate and high-skilled teacher with a systematic and in-depth approach, he rapidly grown out to a popular and well-known teacher in the Martial Arts and Taiji scene. WDP is a fast-growing institute with more than 20 WDP branches all over the world. Many of his students became qualified teachers and won several championships in Europe and China.